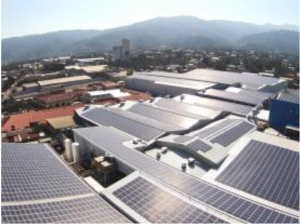 On the roof of PepsiCo’s bottling facility in Honduras the PV developer Smartsolar has installed the largest rooftop power plant in Latin America.

The decentralized system has a capacity of 3 MW and uses 98 SMA Sunny Tripower 24000TL-US inverters and about 11,700 PV modules by Jinko Solar.

Owner of the project is Embotelladora de Sula, S.A., who installed the PV system among other reasons to reduce energy costs and better manage energy price fluctuations. The PV plant is expected to produce 4,252 MWh of electricity per year or 16 % of the manufacturing plant’s annual energy consumption.

The commissioning ceremony of the PV system in San Pedro Sula was attended by Honduran President Juan Orlando Hernández.